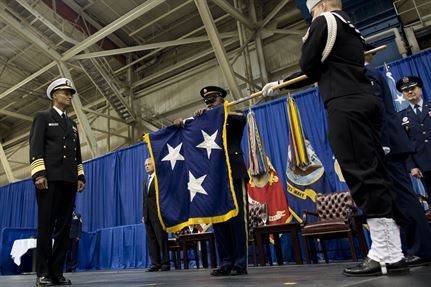 A list of common military officer terms used by the United States Military and Department of Defense.

Commanding Officer (OC) – An officer in command over a military unit, ship, or installation. 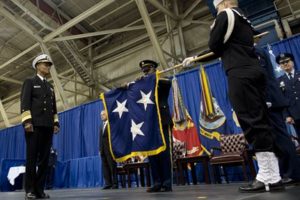 Executive Officer (XO) – Naval Officer who is second in command, reporting to the Commanding Officer (CO).

Flag Officers – In the Navy or Coast Guard, an admiral, vice admiral, or rear admiral (above the rank of Captain). Commonly applies to all general officers authorized to fly their own command flags in the military.

General Officer (GO) – An officer ranking above colonel in the US Army, Air Force, or Marine Corps with a pay-grade of O-7 and above. General Officer ranks include Brigadier General (one-star), Major General (two-star), Lieutenant General (three-star), General (four-star). Five-Star ranks are generally reserved for war time use.

Junior Grade Officers – Navy and Coast Guard in the pay grades of O-1 to O-3.

Mid-Grade Officers – Navy and Coast Guard in the pay grades of O-4 to O-6.

Non-Commissioned Officer – Someone of low rank in the army, air force, or marines who has earned the rank of officer after joining the military.

Non-Commissioned Officer in Charge – Signifies an individual in the enlisted ranks of a military unit who has limited command authority over others in the unit.

Officer in Charge (OIC) – A commissioned officer in charge of an organization, facility or function, responsible for a group of Officers and Sailors in the organization.

Change of Command Ceremony – A military tradition that represents a formal transfer of authority and responsibility for a unit from one commanding or flag officer to another.

Promotion Ceremony – These celebrations take many forms and are intended to motivate others to excel and to perpetuate values of service before self and excellence. These ceremonies are as much about the attendees as the promotee.

Retirement Ceremony – Signals the end of the office appreciation for the many years of faithful and honorable service the member has devoted to their country.

Structure of the U.S. Armed Forces

Commander-in-Chief – The President of the United States who is in charge of all of the U.S. Armed Forces.

Secretary of Defense – The leader and chief executive officer of the Department of Defense, the executive department of the Armed Forces of the United States of America.

Commandant of the Marine Corps (CMC) – The highest-ranking officer in the United States Marine Corps and is a member of the Joint Chiefs of Staff. The CMC reports directly to the SECNAV.

Air Liaison Officer (ALO) – The senior tactical air control party member attached to a ground unit who functions as the primary advisor to the ground commander on air power.

Central Control Officer (CCO) – The officer, embarked in the central control ship, designated by the amphibious task force commander for the overall coordination of the waterborne ship-to-shore movement.

Combat Cargo Officer (CCO) – A Marine Corps embarkation/mobility officer permanently assigned to amphibious warfare ships or naval staffs, as an adviser to and representative of the naval commander in matters pertaining to embarkation and debarkation of troops, their supplies, and equipment.

Container Control Officer (CCO) –  A designated official (E6 or above or civilian equivalent) within a command, installation, or activity who is responsible for control, reporting, use, and maintenance of all Department of Defense-owned and controlled intermodal containers and equipment from time received until dispatched.

Contracting Officer – A Service member or Department of Defense civilian with the legal authority to enter into, administer, modify, and/or terminate contracts.

Defense Coordinating Officer (DCO) – Department of Defense single point of contact for domestic emergencies who is assigned to a joint field office to process requirements for military support, forward mission assignments through proper channels to the appropriate military organizations, and assign military liaisons, as appropriate, to activated emergency support functions.

Embarkation Officer – An officer on the staff of units of the landing force who advises the commander thereof on matters pertaining to embarkation planning and loading ships.

Flight Deck Officer (FDO) – Officer responsible for the safe movement of aircraft on or about the flight deck of an aviation-capable ship.

General Officer Management Office (GOMO) – GOMO manages approximately 415 general officers and promotable colonels (against both Army and joint requirements). GOMO gathers and maintains administrative information, compiles personnel assessments via survey mechanisms, captures officers’ preferences, and maintains candidate pools for senior officer positions. The GOMO chief meets almost weekly with both the Secretary of the Army (SECARMY) and Chief of Staff of the Army (CSA) to discuss promotions, assignments, retirements, and other management issues, and his assignment tenure is usually linked to the CSA’s (approximately 4 years).

General Officer Management Office Website – The GOMO site contains updates on the promotions of officers, officer resumes, and other general information. The Army GOMO web site has been moved to the Army Knowledge Online (AKO) Portal and is accessible only with a controlled Common Access Card (CAC).

Landing Signals Officer (LSO) –  Officer responsible for the visual control of aircraft in the terminal phase of the approach immediately prior to landing.

Primary Control Officer (PCO) – In amphibious operations, the officer embarked in a primary control ship assigned to control the movement of landing craft, amphibious vehicles, and landing ships to and from a colored beach.

Principle Officer – The officer in charge of a diplomatic mission, consular office, or other foreign service post, such as a United States liaison office.

Procuring Contracting Officer – A contracting officer who initiates and signs the contract.

Regional Security Officer (RSO) – A security officer responsible to the chief of mission (ambassador), for security functions of all United States embassies and consulates in a given country or group of adjacent countries.

Tactical Air Officer (TAO) – The officer under the amphibious task force commander who, until control is passed ashore, coordinates planning of all phases of air participation of the amphibious operation and air operations of supporting forces en route to and in the objective area.

Chain of Command — The succession of commanding officers from a superior to a subordinate through which command is exercised.

Chief of Staff (COM) – The senior or principal member or head of a staff who acts as the controlling member of a staff for purposes of the coordination of its work or to exercise command in another’s name.

Command Flag – The command flag is the focal point of a unit. Each element in the design typically has a unique meaning. They serve as a symbol of pride for units.

Flag Officer Flag – The flying of a flag at the masthead to designate the vessel of a fleet commander. A Flag Officer’s flag only flies in the vessel in which he is physically present. It is hoisted and kept flying until they turn over their command to their successor.

General Officer Adornement’s – General Officer’s receive a pistol (the Colt caliber 380 pocket model), flag, belt buckle, holster, magazine, cleaning rod, brush and other accessories. The ceremonial GFO belt and pistol has a long history for officers dating from World War II when their belts were used to carry sabers. The thick black leather belt has an 18-karat gold-plated buckle and imprint of an eagle was first produced in 1944. The pistols are special in that they are procured especially for general officers, with serial numbers prefixed with the letters “GO”. Most general officers purchase their pistols when they retire.

Senior Executive Service Flag – The SES flag was designed in 1988. The design includes the SES insignia (a keystone). Additionally, there are thirteen gold stars surrounding the SES symbol signify the original thirteen colonies.

Senior Executive Service Ensignia (or Emblem) – The SES insignia or emblem at the center of the design represents a keystone – the center stone that holds all the stones of an arch in place. This represents the critical role of the SES as a central coordinating point between Government’s political leadership which sets the political agenda and the line workers who implement it.

How to Refer to Members of the military Depending Upon Their Specific Service.