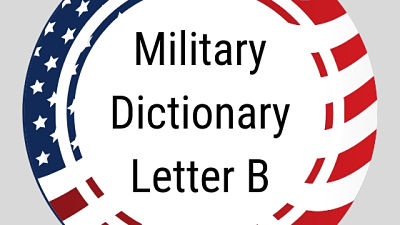 Here are the DOD Dictionary terms beginning with the letter B and organized alphabetically. Browse terms from the official DOD Dictionary of Military and Associated Terms that start with B and view definitions. Read on for military definitions that begin with B such as beachhead,  boost phase, broken stowage and more.

bale cubic capacity — The space available for cargo measured in cubic feet to the inside of the cargo battens, on the frames, and to the underside of the beams.

ballistic missile — Any missile that does not rely upon aerodynamic surfaces to produce lift and consequently follows a ballistic trajectory when thrust is terminated. Also called BM. See also guided missile.

barrier — A coordinated series of natural or man-made obstacles designed or employed to channel, direct, restrict, delay, or stop the movement of an opposing force and to impose additional losses in personnel, time, and equipment on the opposing force.

barrier combat air patrol — One or more divisions or elements of fighter aircraft employed between a force and an objective area as a barrier across the probable direction of enemy attack. See also combat air patrol.

barrier, obstacle, and mine warfare plan — A comprehensive, coordinated plan that includes responsibilities; general location of unspecified and specific barriers, obstacles, and minefields; special instructions; limitations; coordination; and completion times; and may designate locations of obstacle zones or belts.

base — 1. A locality from which operations are projected or supported. 2. An area or locality containing installations which provide logistics or other support. 3. Home airfield or home carrier. See also facility.

base boundary — A line that delineates the surface area of a base for the purpose of facilitating coordination and deconfliction of operations between adjacent units, formations, or areas.

base cluster — In base defense operations, a collection of bases, geographically grouped for mutual protection and ease of command and control.

base defense — The local military measures, both normal and emergency, required to nullify or reduce the effectiveness of enemy attacks on, or sabotage of, a base, to ensure that the maximum capacity of its facilities is available to United States forces.

base defense operations center — A command and control facility established by the base commander to serve as the focal point for base security and defense. Also called BDOC.

base defense zone — An air defense zone established around an air base and limited to the engagement envelope of short-range air defense weapons systems defending that base. Also called BDZ.

base development — The acquisition, development, expansion, improvement, construction and/or replacement of the facilities and resources of a location to support forces.

baseline costs — The continuing annual costs of military operations funded by the operations and maintenance and military personnel appropriations.

base operating support-integrator — The designated Service component or joint task force commander assigned to synchronize all sustainment functions for a contingency base. Also called BOS-I.

base plan — A type of operation plan that describes the concept of operations, major forces, sustainment concept, and anticipated timelines for completing the mission without annexes or time-phased force and deployment data. Also called BPLAN.

base support installation — A Department of Defense Service or agency installation within the United States and its territories tasked to serve as a base for military forces engaged in either homeland defense or conducting defense support of civil authorities. Also called BSI.

basic encyclopedia — A compilation of identified installations and physical areas of potential significance as objectives for attack. Also called BE.

basic load — The quantity of supplies required to be on hand within, and which can be moved by, a unit or formation, expressed according to the wartime organization of the unit or formation and maintained at the prescribed levels.

battle damage repair — Essential repair, which may be improvised, carried out rapidly in a battle environment in order to return damaged or disabled equipment to temporary service. Also called BDR.

battle injury — Damage or harm sustained by personnel during or as a result of battle conditions. Also called BI.

battle management — The management of activities within the operational environment based on the commands, direction, and guidance given by appropriate authority.

battle rhythm — A deliberate, daily schedule of command, staff, and unit activities intended to maximize use of time and synchronize staff actions.

beach — 1. The area extending from the shoreline inland to a marked change in physiographic form or material or to the line of permanent vegetation (coastline). 2. In amphibious operations, that portion of the shoreline designated for landing of a tactical organization.

beachhead — A designated area on a hostile or potentially hostile shore that, when seized and held, ensures the continuous landing of troops and materiel and provides maneuver space requisite for subsequent projected operations ashore.

beach support area — In amphibious operations, the area to the rear of a landing force, or elements thereof, that contains the facilities for the unloading of troops and materiel and the support of the forces ashore. Also called BSA.

begin morning civil twilight — The period of time at which the sun is halfway between beginning morning and nautical twilight and sunrise, when there is enough light to see objects clearly with the unaided eye. Also called BMCT.

begin morning nautical twilight — The start of that period where, in good conditions and in the absence of other illumination, the sun is 12 degrees below the eastern horizon and enough light is available to identify the general outlines of ground objects and conduct limited military operations. Also called BMNT.

biological agent — A microorganism (or a toxin derived from it) that causes disease in personnel, plants, or animals or causes the deterioration of materiel. See also chemical agent.

biological hazard — An organism, or substance derived from an organism, that poses a threat to human or animal health.

biometrics — The process of recognizing an individual based on measurable anatomical, physiological, and behavioral characteristics.

biometrics-enabled intelligence — The intelligence derived from the processing of biologic identity data and other all-source for information concerning persons of interest. Also called BEI.

biosurveillance — The process to gather, integrate, interpret, and communicate essential information related to all-hazards, threats, or disease activity affecting human, animal, or plant health to achieve early detection and warning, contribute to overall situational awareness of the health aspects of an incident, and to enable better decision making at all levels.

blister agent — A chemical agent that injures the eyes and lungs, and burns or blisters the skin. Also called vesicant agent.

blood agent — A chemical compound, including the cyanide group, that affects bodily functions by preventing the normal utilization of oxygen by body tissues.

blood chit — A small sheet of material depicting an American flag and a statement in several languages to the effect that anyone assisting the bearer to safety will be rewarded. See also evasion aid.

board — An organized group of individuals within a headquarters, appointed and tasked by the commander (or other authority), that meets with the purpose of gaining guidance or decision.

boat lane — A lane for amphibious assault landing craft, which extends from the line of departure to the beach.

boat space — The space and weight factor used in planning for one person with individual equipment to determine overall ship-to-shore movement requirements for boats, landing craft, and amphibious vehicles.

bona fides — 1. In personnel recovery, the use of verbal or visual communication by individuals who are unknown to one another, to establish their authenticity, sincerity, honesty, and truthfulness. See also evasion; recovery; recovery operations. 2. The lack of fraud or deceit: a determination that a person is who he/she says he/she is.

boost phase — That portion of the flight of a ballistic missile or space vehicle during which the booster and sustainer engines operate. See also midcourse phase; terminal phase.

bottom mine — A mine with negative buoyancy that remains on the seabed. See also mine.

boundary — A line that delineates surface areas for the purpose of facilitating coordination and deconfliction of operations between adjacent units, formations, or areas.

branch — 1. A subdivision of any organization. 2. A geographically separate unit of an activity, which performs all or part of the primary functions of the parent activity on a smaller scale. 3. An arm or service of the Army. 4. The contingency options built into the base plan used for changing the mission, orientation, or direction of movement of a force to aid success of the operation based on anticipated events, opportunities, or disruptions caused by enemy actions and reactions. See also sequel.

breakbulk ship — A ship with conventional holds for stowage of breakbulk cargo and a limited number of containers, below or above deck, and equipped with cargo-handling gear.

brevity code — A code word, which provides no security, that serves the sole purpose of shortening of messages rather than the concealment of their content.

broken stowage — The space lost in the holds of a vessel because of the contour of the ship, dunnage, ladders, stanchions, and the shape of the cargo.

broken stowage factor — A factor applied to the available space for embarkation, due to the loss between boxes, between vehicles, around stanchions, and over cargo, that will vary depending on the type and size of vehicles, type and size of general cargo, training and experience of loading personnel, type of loading, method of stowage, and configuration of compartments.

bulk cargo — That which is generally shipped in volume where the transportation conveyance is the only external container; such as liquids, ore, or grain.