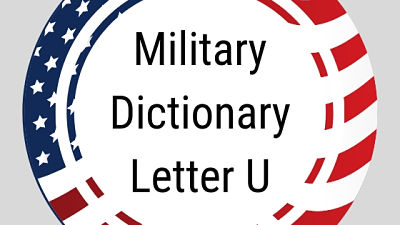 Here are the DOD Dictionary terms beginning with the letter U and organized alphabetically. Browse terms from the official DOD Dictionary of Military and Associated Terms that start with U and view definitions. Read on for military definitions that begin with U such as Unified Command Plan, Universal Time, unstuffing, and more.

uncertain environment — Operational environment in which host government forces, whether opposed to or receptive to operations that a unit intends to conduct, do not have totally effective control of the territory and population in the intended operational area.

unconventional warfare — Activities conducted to enable a resistance movement or insurgency to coerce, disrupt, or overthrow a government or occupying power by operating through or with an underground, auxiliary, and guerrilla force in a denied area. Also called UW.

underwater demolition team — A group of officers and enlisted specially trained and equipped to accomplish the destruction or neutralization of underwater obstacles and associated tasks.

unified action — The synchronization, coordination, and/or integration of the activities of governmental and nongovernmental entities with military operations to achieve unity of effort.

unified command — A command with a broad continuing mission under a single commander and composed of significant assigned components of two or more Military Departments that is established and so designated by the President, through the Secretary of Defense with the advice and assistance of the Chairman of the Joint Chiefs of Staff. Also called unified combatant command. See also combatant command; subordinate unified command.

unified geospatial-intelligence operations — The collaborative and coordinated process to assess, align, and execute geospatial intelligence across the National System for Geospatial Intelligence and its partner organizations. Also called UGO.

unit — 1. Any military element whose structure is prescribed by competent authority. 2. An organization title of a subdivision of a group in a task force.

unit aircraft — Those aircraft provided to an aircraft unit for the performance of a flying mission.

unit personnel and tonnage table — A table included in the loading plan of a combat- loaded ship as a recapitulation of totals of personnel and cargo by type, listing cubic measurements and weight. Also called UP&TT.

unity of command — The operation of all forces under a single responsible commander who has the requisite authority to direct and employ those forces in pursuit of a common purpose.

unity of effort — Coordination and cooperation toward common objectives, even if the participants are not necessarily part of the same command or organization, which is the product of successful unified action.

Universal Joint Task List — A menu of tasks that may be selected by a joint force commander to accomplish the assigned mission. Also called UJTL.

Universal Time — A measure of time that conforms, within a close approximation, to the mean diurnal rotation of the Earth and serves as the basis of civil timekeeping. Also called ZULU time.

unknown — 1. A code meaning “information not available.” 2. An unidentified target. An aircraft or ship that has not been determined to be hostile, friendly, or neutral using identification friend or foe and other techniques, but that must be tracked by air defense or naval engagement systems. 3. An identity applied to an evaluated track that has not been identified. See also assumed friend; friend; neutral; suspect.

unmanned aircraft — An aircraft that does not carry a human operator and is capable of flight with or without human remote control. Also called UA.

unstable patient — A patient whose physiological status is in fluctuation and for whom emergent, treatment, and/or surgical intervention are anticipated during treatment or evacuation, and the patient’s rapidly changing status and requirements are beyond the standard en route care capability and requires medical/surgical augmentation.

unstuffing — The removal of cargo from a container. Also called stripping.

use of force policy — Policy guidance issued by the Commandant, United States Coast Guard, on the use of force and weapons.

US national — US citizen and US permanent and temporary legal resident aliens.