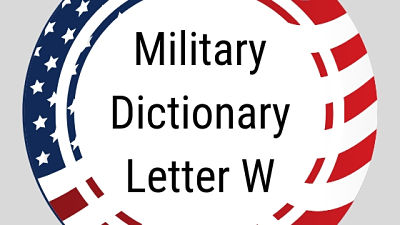 Here are the DOD Dictionary terms beginning with the letter W and organized alphabetically. Browse terms from the official DOD Dictionary of Military and Associated Terms that start with W and view definitions. Read on for military definitions that begin with W such as warning intelligence, weapons of mass destruction, wounded warrior programs and more.

warning order — 1. A preliminary notice of an order or action that is to follow. 2. A planning directive that initiates the development and evaluation of military courses of action by a commander. Also called WARNORD.

wartime reserve modes — Characteristics and operating procedures of sensor, communications, navigation aids, threat recognition, weapons, and countermeasures systems that will contribute to military effectiveness if unknown to or misunderstood by opposing commanders before they are used, but could be exploited or neutralized if known in advance. Also called WARM.

Washington Liaison Group — An organization consisting of members of Department of State and Department of Defense, chaired by a representative of Department of State, which has basic responsibility for the coordination and implementation of plans for the protection and evacuation in emergencies of persons abroad for whom the Secretaries of State or Defense are responsible. Also called WLG.

waterspace management — The allocation of waterspace in terms of antisubmarine warfare attack procedures to permit the rapid and effective engagement of hostile submarines while preventing inadvertent attacks  on  friendly  submarines.  Also  called  WSM.

wave — A formation of forces, including landing craft, amphibious vehicles, or aircraft, required to beach or land about the same time.

weaponeer — An individual who has completed requisite training to determine the means required to create a desired effect on a given target.

weaponeering — The process of determining the specific means required to create a desired effect on a given target.

weapon engagement zone — In air and missile defense, airspace of defined dimensions within which the responsibility for engagement of air threats normally rests with a particular weapon system. Also called WEZ.

weapons control status — An air and missile defense control measure declared for a particular area and time by an area air defense commander, or delegated subordinate commander, based on the rules of engagement that establish the conditions under which fighters and surface air defense weapons are permitted to engage threats. Also call WCS.

weapons free zone — An air defense zone established for the protection of key assets or facilities, other than air bases, where weapon systems may be fired at any target not positively recognized as friendly.

weapons of mass destruction — Chemical, biological, radiological, or nuclear weapons capable of a high order of destruction or causing mass casualties, and excluding the means of transporting or propelling the weapon where such means is a separable and divisible part from the weapon.  Also called  WMD.  See also special  operations.

weapons readiness state — The degree of readiness of air defense weapons which can become airborne or be launched to carry out an assigned task, and normally expressed in numbers of weapons and numbers of minutes.

weapon system — A combination of one or more weapons with all related equipment, materials, services, personnel, and means of delivery and deployment (if applicable) required for self-sufficiency.

wing — 1. An Air Force unit composed normally of one primary mission group and the necessary supporting organizations. 2. A fleet air wing is the basic organizational and administrative unit for naval-, land-, and tender-based aviation. 3. A balanced Marine Corps task organization of aircraft groups and squadrons, together with appropriate command, air control, administrative, service, and maintenance units. 4. A flank unit; that part of a military force to the right or left of the main body.