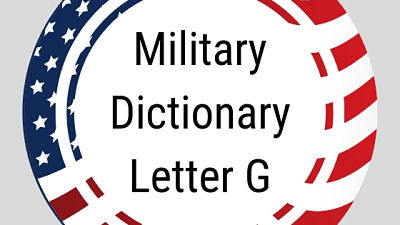 Here are the DOD Dictionary terms beginning with the letter G and organized alphabetically. Browse terms from the official DOD Dictionary of Military and Associated Terms that start with G and view definitions. Read on for military definitions that begin with G such as Global Positioning System (GPS) , guerrilla force, gun-target  line (GTL) and more.

general engineering — Those engineering capabilities and activities, other than combat engineering, that provide infrastructure and modify, maintain, or protect the physical environment. Also called GE.

general support-reinforcing — The artillery mission of supporting the force as a whole and of providing reinforcing fires for other artillery units. Also called GSR.

geographic coordinates — The quantities of latitude and longitude which define the position of a point on the surface of the Earth with respect to the reference ellipsoid.

geospatial information — Information that identifies the geographic location and characteristics of natural or constructed features and boundaries on the Earth, including: statistical data and information derived from, among other things, remote sensing, mapping, and surveying technologies; and mapping, charting, geodetic data and related products.

geospatial-intelligence base for contingency operations — A mobile visualization tool that provides access to geospatial data where networks or infrastructure have been damaged or do not exist. Also called GIBCO.

global campaign plan — Primary means by which the Chairman of the Joint Chiefs of Staff or designated combatant commander arranges for unity of effort and purpose and through which they guide the planning, integration, and coordination of joint operations across combatant command areas of responsibility and functional responsibilities. Also called GCP.

global distribution — The process that coordinates and synchronizes fulfillment of joint force requirements from point of origin to point of employment. See also distribution.

global maritime partnership — An approach to cooperation among maritime nations with a shared stake in international commerce, safety, security, and freedom  of the seas.

global missile defense — Missile defense operations, activities, or actions that affect more than one combatant command and require synchronization among the affected commands to deter and prevent attacks, destroy enemy missiles, or nullify or reduce the effectiveness of an attack. Also called global MD.

go/no-go — A critical point at which a decision to proceed or not must be made.

governance — The state’s ability to serve the citizens through the rules, processes, and behavior by which interests are articulated, resources are managed, and power is exercised in a society.

grid coordinates — Coordinates of a grid coordinate system to which numbers and letters are assigned for use in designating a point on a gridded map, photograph, or chart.

ground alert — That status in which aircraft on the ground/deck are fully serviced and armed, with combat crews in readiness to take off within a specified period of time after receipt of a mission order. See also airborne alert.

ground-based interceptor — A fixed-based, surface-to-air missile for defense against long- range ballistic missiles using an exo-atmospheric hit-to-kill interception of the targeted reentry vehicle in the midcourse phase of flight.

group — A long-standing functional organization that is formed to support a broad function within a headquarters.

guarded frequencies — A list of time-oriented, enemy frequencies that are currently being exploited for combat information and intelligence or jammed after the commander has weighed the potential operational gain against the loss of the technical information. See also electronic warfare.

guided missile — An unmanned vehicle moving above the surface of the Earth whose trajectory or flight path is capable of being altered by an external or internal mechanism. See also ballistic missile.