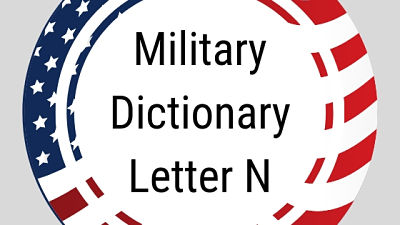 Here are the DOD Dictionary terms beginning with the letter N and organized alphabetically. Browse terms from the official DOD Dictionary of Military and Associated Terms that start with N and view definitions. Read on for military definitions that begin with N such as nerve agent, neutrality, nonlethal weapon, no-strike list, and more.

named area of interest — The geospatial area or systems node or link against which information that will satisfy a specific information requirement can be collected, usually to capture indications of adversary courses of action. Also called NAI. See also area of interest.

narcoterrorism — Terrorism that is linked to illicit drug trafficking.

National Capital Region — A geographic area encompassing the District of Columbia and 11 local jurisdictions in the State of Maryland and the Commonwealth of Virginia. Also called NCR.

National Detainee Reporting Center — The national-level center that accounts for all persons who pass through the care, custody, and control of the Department of Defense and that obtains and stores information concerning detainees and their confiscated personal property. Also called NDRC.

national emergency — A condition declared by the President or Congress by virtue of powers previously vested in them that authorize certain emergency actions to be undertaken in the national interest. See also mobilization.

National Incident Management System — A national crisis response system that provides a consistent, nationwide approach for federal, state, local, and tribal governments; the private sector; and nongovernmental organizations to work effectively and efficiently together to prepare for, respond to, and recover from domestic incidents, regardless of cause, size, or complexity. Also called NIMS.

national intelligence — All intelligence that pertains to more than one agency and involves threats to the United States, its people, property, or interests; the development, proliferation, or use of weapons of mass destruction; or any other matter bearing on United States national or homeland security.

National Military Command System — The priority component of the Global Command and Control System designed to support the President, Secretary of Defense, and Joint Chiefs of Staff in the exercise of their responsibilities. Also called NMCS.

national policy — A broad course of action or statements of guidance adopted by the government at the national level in pursuit of national objectives.

national preparedness — Actions taken to plan, organize, equip, train, and exercise to build and sustain the capabilities necessary to prevent, protect against, mitigate the effects of, respond to, and recover from those threats that pose the greatest risk to the security of the nation.

national security — A collective term encompassing both national defense and foreign relations of the United States with the purpose of gaining: a. A military or defense advantage over any foreign nation or group of nations; b. A favorable foreign relations position; or c. A defense posture capable of successfully resisting hostile or destructive action from within or without, overt or covert. See also security.

national security interests — The foundation for the development of valid national objectives that define United States goals or purposes.

national shipping authority — The organization within each Allied government responsible in time of war for the direction of its own merchant shipping. Also called NSA.

national special security event — A designated event that, by virtue of its political, economic, social, or religious significance, may be the target of terrorism or other criminal activity. Also called NSSE.

natural disaster — An emergency situation posing significant danger to life and property that results from a natural cause. See also domestic emergencies.

naval construction force — The combined construction units of the Navy that are part of the operating forces and represent the Navy’s capability for advanced base construction. Also called NCF.

naval operation — 1. A naval action (or the performance of a naval mission) that may be strategic, operational, tactical, logistic, or training. 2. The process of carrying on or training  for  naval  combat  to  gain  the  objectives  of  any  battle   or  campaign.

naval special warfare — A naval warfare specialty that conducts special operations with an emphasis on maritime, coastal, and riverine environments using small, flexible, mobile units operating under, on, and from the sea. Also called NSW.

Navy special operations forces — Those Active and Reserve Component Navy forces designated by the Secretary of Defense that are specifically organized, trained, and equipped to conduct and support special operations. Also called NAVSOF.

need to know — A criterion used in security procedures that requires the custodians of classified information to establish, prior to disclosure, that the intended recipient must have access to the information to perform his or her official duties.

nerve agent — A potentially lethal chemical agent that interferes with the transmission of nerve impulses.

net explosive weight — The actual weight in pounds of explosive mixtures or compounds, including the trinitrotoluene equivalent of energetic material, that is used in determination of explosive limits and explosive quantity data arcs. Also called NEW.

network engagement — Interactions with friendly, neutral, and threat networks, conducted continuously and simultaneously at the tactical, operational, and strategic levels, to help achieve the commander’s objectives within an operational area.

neutral — In combat and combat support operations, an identity applied to a track whose characteristics, behavior, origin, or nationality indicate that it is neither supporting nor opposing friendly forces. See also suspect; unknown.

neutrality — In international law, the attitude of impartiality during periods of war adopted by third states toward a belligerent and subsequently recognized by the belligerent, which creates rights and duties between the impartial states and the belligerent.

neutralize — 1. As pertains to military operations, to render ineffective or unusable. 2. To render enemy personnel or materiel incapable of interfering with a particular operation. 3. To render safe mines, bombs, missiles, and booby 4. To make harmless anything contaminated with a chemical agent.

node — 1. A location in a mobility system where a movement requirement is originated, processed for onward movement, or terminated. 2. In communications and computer systems, the physical location that provides terminating, switching, and gateway access services to support information exchange. 3. An element of a system that represents a person, place, or physical thing.

no-fire area — An area designated by the appropriate commander into which fires or their effects are prohibited. Also called NFA. See also fires.

nonbattle injury — A person who becomes a casualty due to circumstances not directly attributable to hostile action or terrorist activity. Also called NBI.

nonconventional assisted recovery — Personnel recovery conducted by indigenous/surrogate personnel that are trained, supported, and led by special operations forces, unconventional warfare ground and maritime forces, or other government agencies’ personnel that have been specifically trained and directed to establish and operate indigenous or surrogate infrastructures. Also called NAR.

nonlethal reference point — A point that designates the intended target for creating nonlethal effects, which may not be a precise physical location and is considered an aimpoint for databasing. Also called NLRP.

nonlethal weapon — Weapon, device, or munition that is explicitly designed and primarily employed to incapacitate personnel or materiel immediately, while minimizing fatalities, permanent injury to personnel, and undesired damage to property in the target area or environment. Also called NLW.

nonpersistent agent — A chemical agent that, when released, dissipates and/or loses its ability to cause casualties after 10 to 15 minutes.

nonpersistent mine — Mine that remains active for a predetermined period of time until self-destruction, self-neutralization, or self-deactivation renders the  mine  inactive.

nonproliferation — Actions to prevent the acquisition of weapons of mass destruction by dissuading or impeding access to, or distribution of, sensitive technologies, material, and expertise. See also counterproliferation.

nonscheduled units — Units of the landing force held in readiness for landing during the initial unloading period but  not  included  in  either  scheduled  or  on-call  waves.

non-unit cargo — All equipment and supplies requiring transportation to an operational area, other than those identified as the equipment or accompanying supplies of a specific unit.

non-unit-related personnel — All personnel requiring transportation to or from an operational area, other than those  assigned  to  a  specific  unit.  Also  called  NRP.

no-strike list — A list of objects or entities characterized as protected from the effects of military operations under international law and/or rules of engagement. Also called NSL. See also law of armed conflict.

not mission capable, supply — Material condition indicating that systems and equipment are not capable of performing any of their assigned missions because of maintenance work stoppage due to a supply shortage. Also called NMCS.

nuclear incident — An unexpected incident involving a nuclear weapon, facility, or component, but not constituting a nuclear weapon(s) accident, resulting in any of the following: a. an increase in the possibility of explosion or radioactive contamination; b. errors committed in the assembly, testing, loading, or transportation of equipment, and/or the malfunctioning of equipment and materiel which could lead to an unintentional operation of all or part of the weapon arming and/or firing sequence, or which could lead to a substantial change in yield, or increased dud probability; and c. any act of God, unfavorable environment, or condition resulting in damage to the weapon, facility, or component.

nuisance minefield — A minefield laid to delay and disorganize the enemy and to hinder the use of an area or route. See also minefield.

numbered beach — In amphibious operations, a subdivision of a colored beach designated for the assault landing of a battalion landing team, or similar-sized unit, when landed as part of a larger force.