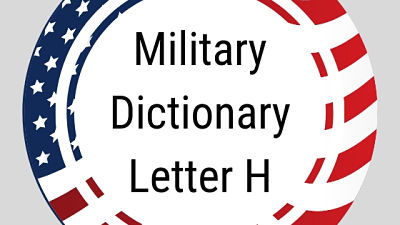 Here are the DOD Dictionary terms beginning with the letter H and organized alphabetically. Browse terms from the official DOD Dictionary of Military and Associated Terms that start with H and view definitions. Read on for military definitions that begin with H such as homeland security, hostile act, hung ordnance and more.

half-life — The time required for the activity of a given radioactive species to decrease to half of its initial value due to radioactive decay.

hasty breach — The creation of lanes through enemy minefields by expedient methods such as blasting with demolitions, pushing rollers or disabled vehicles through the minefields when the time factor does not permit detailed reconnaissance, deliberate breaching, or bypassing the obstacle.

hazard — A condition with the potential to cause injury, illness, or death of personnel; damage to or loss of equipment or property; or mission degradation. See also injury.

hazardous cargo — Cargo that includes not only large bulk-type categories, such as explosives; pyrotechnics; petroleum, oils, and lubricants; compressed gases; and corrosives and batteries, but lesser-quantity materials like super-tropical bleach (oxiderizer), pesticides, poisons, medicines, and specialized medical chemicals and medical waste that can be loaded as cargo.

hazards of electromagnetic radiation to fuels — The potential hazard that is created when volatile combustibles, such as fuel, are exposed to electromagnetic fields of sufficient energy to cause ignition. Also called HERF.

head-up display — A display of flight, navigation, attack, or other information superimposed upon the pilot’s forward field of view. See also flight.

health surveillance — The regular or repeated collection, analysis, and interpretation of health-related data and the dissemination of information to monitor the health of a population and to identify potential health risks, thereby enabling timely interventions to prevent, treat, reduce, or control disease and injury, which includes occupational and environmental health surveillance and medical surveillance subcomponents.

health threat — A composite of ongoing or potential enemy actions; adverse environmental, occupational, and geographic and meteorological conditions; endemic diseases; and employment of chemical, biological, radiological, or nuclear weapons (to include weapons of mass destruction) that have the potential to affect the short- or long-term health (including psychological impact) of personnel.

heavy-lift cargo — 1. Any single cargo lift, weighing over 5 long tons, and to be handled aboard ship. 2. In Marine Corps usage, individual units of cargo that exceed 800 pounds in weight or 100 cubic feet in volume.

heavy-lift ship — A ship specially designed and capable of loading and unloading heavy and bulky items and has booms of sufficient capacity to accommodate a single lift of 100 tons.

height of burst — The vertical distance from the Earth’s surface or target to the point of burst. Also called HOB.

HERO SUSCEPTIBLE ordnance — Any ordnance item containing electro-explosive devices proven by test or analysis to be adversely affected by radio frequency energy to the point that the safety and/or reliability of the system is in jeopardy when the system is employed in its expected radio frequency environment. See also electromagnetic radiation; hazards of electromagnetic radiation to ordnance; HERO SAFE ordnance; HERO UNSAFE ordnance; ordnance.

H-hour — 1. The specific  hour on D-day at which a particular operation commences. 2. In amphibious operations, the time the first landing craft or amphibious vehicle of the waterborne wave lands or is scheduled to land on the beach and, in some cases, the commencement of countermine breaching operations.

high altitude bombing — Horizontal bombing with the height of release over 15,000 feet.

high-payoff target — A target whose loss to the enemy will significantly contribute to the success of the friendly course of action. Also called HPT. See also high-value target; target.

high seas — The open ocean area that is over 200 nautical miles from shore.

high velocity drop — A drop procedure in which the drop velocity is greater than 30 feet per second and lower than free drop velocity. See also airdrop.

homeland defense — The protection of United States sovereignty, territory, domestic population, and critical infrastructure against external threats and aggression or other threats as directed by the President. Also called HD.

homing — The technique whereby a mobile station directs itself, or is directed, towards a source of primary or reflected energy, or to a specified point.

homing adaptor — A device, when used with an aircraft radio receiver, that produces aural and/or visual signals indicating the direction of a transmitting radio station with respect to the heading of the aircraft.

horizontal stowage — The lateral distribution of unit equipment or categories of supplies so they can be unloaded simultaneously from two or more holds.

hostile environment — Operational environment in which host government forces, whether opposed to or receptive to operations that a unit intends to conduct, do not have control of the territory and population in the intended operational area.

hostile intent — The threat of imminent use of force against the United States, United States forces, or other designated persons or property.

host nation — A nation which receives forces and/or supplies from allied nations and/or North Atlantic Treaty Organization to be located on, to operate in, or to transit through its territory. Also called HN.

host-nation support — Civil and/or military assistance rendered by a nation to foreign forces within its territory during peacetime, crises or emergencies, or war based on agreements mutually concluded between nations. Also called HNS. See also host nation.

hub — An organization that sorts and distributes inbound cargo from wholesale supply sources (airlifted, sealifted, and ground transportable) and/or from within the theater. See also hub and spoke distribution; spoke.

human factors — The physical, cultural, psychological, and behavioral attributes of an individual or  group  that  influence  perceptions,  understanding,  and  interactions.

humanitarian demining assistance — The activities related to the furnishing of education, training, and technical assistance with respect to the detection and clearance of land mines and other explosive remnants of war.

hung ordnance — Those weapons or stores on an aircraft that the pilot has attempted to drop or fire but could not because of a malfunction of the weapon, rack or launcher, or aircraft release and control system.

hydrographic reconnaissance — Reconnaissance of an area of water to determine depths; beach gradients; the nature of the bottom; and the location of coral reefs, rocks, shoals, and man-made obstacles.

hygiene services — The provision of personal hygiene facilities and waste collection, and the cleaning, repair, replacement, and return of individual clothing and equipment items in a deployed environment.