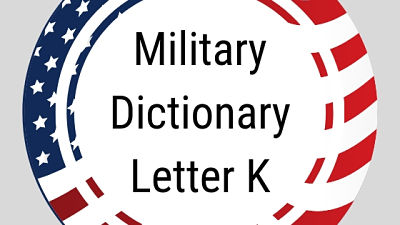 Here are the DOD Dictionary terms beginning with the letter K and organized alphabetically. Browse terms from the official DOD Dictionary of Military and Associated Terms that start with K and view definitions. Read on for military definitions that begin with K such as key position, kill box more.

key position — A civilian position, public or private (designated by the employer and approved by the Secretary concerned), that cannot be vacated during war or national emergency.

key terrain — Any locality, or area, the seizure or retention of which affords a marked advantage to either combatant.