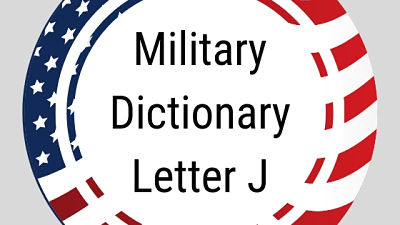 Here are the DOD Dictionary terms beginning with the letter J and organized alphabetically. Browse terms from the official DOD Dictionary of Military and Associated Terms that start with J and view definitions. Read on for military definitions that begin with J such as joint intelligence, joint task force, judge advocate, jumpmaster and more.

joint distribution — The operational process of synchronizing all elements of the joint logistic system using the Joint Deployment and Distribution Enterprise for end-to-end movement of forces and materiel from point of origin to the designated point of need.

joint doctrine development community — The Chairman of the Joint Chiefs of Staff, the Services, the combatant commands, the Joint Staff, the combat support agencies, the doctrine development agencies of the Services and the joint community, the National Defense University, the United States Element, North American Aerospace Defense Command, the National Guard Bureau, and Chairman of the Joint Chiefs of Staff controlled activities. Also called JDDC.

Joint Doctrine Planning Conference — A forum convened by the Joint Staff Directorate for Joint Force Development that meets semiannually to address and vote on project proposals; discuss key joint doctrinal and operational issues; discuss potential changes to the joint doctrine development process; keep up to date on the status of the joint publication projects and emerging publications; and keep abreast of other initiatives of interest to the members. Also called JDPC.

joint document exploitation center — An element, normally subordinate to the intelligence directorate of a joint staff, responsible for deriving intelligence information from captured documents including all forms of electronic data and other forms of stored textual  and  graphic   information.   Also  called  JDEC.   See   also   intelligence.

joint facilities utilization board — A joint board that evaluates and reconciles component requests for real estate, use of existing facilities, inter-Service support, and construction to ensure compliance with Joint Civil-Military Engineering Board priorities. Also called JFUB.

joint fires — Fires delivered during the employment of forces from two or more components in coordinated action to produce desired effects in support of a common objective. See also fires.

joint force air component commander — The commander within a unified command, subordinate unified command, or joint task force responsible to the establishing commander for recommending the proper employment of assigned, attached, and/or made available for tasking air forces; planning and coordinating air operations; or accomplishing such operational missions as may be assigned. Also called JFACC. See also joint force commander.

joint force land component commander — The commander within a unified command, subordinate unified command, or joint task force responsible to the establishing commander for recommending the proper employment of assigned, attached, and/or made available for tasking land forces; planning and coordinating land operations; or accomplishing such operational missions as may be assigned. Also called JFLCC. See also joint force commander.

joint force maritime component commander — The commander within a unified command, subordinate unified command, or joint task force responsible to the establishing commander for recommending the proper employment of assigned, attached, and/or made available for tasking maritime forces and assets; planning and coordinating maritime operations; or accomplishing such operational missions as may be assigned. Also called JFMCC. See also joint force commander.

joint intelligence — Intelligence produced by elements of more than one Service of the same nation.

joint interrogation operations — 1. Activities conducted by a joint or interagency organization to extract information for intelligence purposes from detainees. 2. Activities conducted in support of law enforcement efforts to adjudicate enemy combatants who are believed to have committed crimes against United States persons or property. Also called JIO.

joint logistics enterprise — A multitiered matrix of key global logistics providers cooperating and structured to achieve a unity of effort without jeopardizing the integrity of   their   own    organizational    missions    and    goals.    Also    called    JLEnt.

joint manpower program — The policy, processes, and systems used in determination and prioritization within and among joint Service manpower requirements. Also called JMP.

joint operations — Military actions conducted by joint forces and those Service forces employed in specified command relationships with each other, which of themselves, do not establish joint forces.

joint personnel processing center — A center established in an operational area by the appropriate joint force commander with the responsibility for the in-processing and out- processing of personnel upon their arrival in and departure from the theater. Also called JPPC.

joint planning process — An orderly, analytical process that consists of a logical set of steps to analyze a mission, select the best course of action, and produce a campaign or joint operation plan or order. Also called JPP. See also joint planning.

joint proponent — A Service, combatant command, or Joint Staff directorate assigned coordinating authority to lead the collaborative development and integration of joint capability with specific responsibilities designated by the Secretary of Defense.

joint reception coordination center — An organization that, when established, ensures that Department of Defense personnel and noncombatant evacuees receive adequate assistance and support for an orderly and expedient debarkation, movement to final destination in the United States, and appropriate follow-on assistance at the final destination. Also called JRCC.

joint security coordinator — The officer with responsibility for coordinating the overall security of the operational area in accordance with joint force commander directives and priorities. Also called JSC.

joint servicing — That function performed by a jointly staffed and financed activity in support of two or more Services.

joint staff — 1. The staff of a commander of a unified or specified command, subordinate unified command, joint task force, or subordinate functional component (when a functional component command will employ forces from more than one Military Department), that includes members from the several Services comprising the force. 2. (capitalized as Joint Staff) The staff under the Chairman of the Joint Chiefs of Staff that assists the Chairman and the other members of the Joint Chiefs of Staff in carrying out their responsibilities. Also called JS.

Joint Strategic Planning System — One of the primary means by which the Chairman of the Joint Chiefs of Staff, in consultation with the other members of the Joint Chiefs of Staff and the combatant commanders, carries out the statutory responsibilities to assist the President and Secretary of Defense in providing strategic direction to the Armed Forces. Also called JSPS.

joint table of distribution — A manpower document that identifies the positions and enumerates the spaces that have been approved for each organizational element of a joint activity for a specific fiscal year (authorization year), and those accepted for the four subsequent fiscal years (program years). Also called JTD. See also joint manpower program.

joint test publication — A proposed publication produced for field-testing an emergent concept that has been validated through the Joint Experimentation Program or a similar joint process. Also called JTP. See also Chairman of the Joint Chiefs of Staff instruction; joint doctrine; joint publication.

joint urban operations — Joint operations planned and conducted on, or against objectives within a topographical complex and its adjacent natural terrain, where man-made construction or the density of population are the dominant features. Also called JUOs. See also joint operations.

judge advocate —An officer of the Judge Advocate General’s Corps of the Army, Air Force, or Navy, or officers of the Marine Corps or Coast Guard designated as a judge advocate. Also called JA.

jumpmaster — The assigned airborne-qualified individual who controls paratroops from the time they enter the aircraft until they exit.