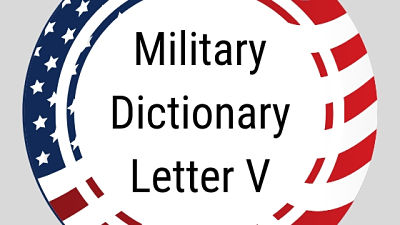 Here are the DOD Dictionary terms beginning with the letter V and organized alphabetically. Browse terms from the official DOD Dictionary of Military and Associated Terms that start with V and view definitions. Read on for military definitions that begin with V such as vehicle cargo, vertical replenishment, vulnerability assessment and more.

validate — Execution procedure used by combatant command components, supporting combatant commanders, and providing organizations to confirm to the supported commander and United States Transportation Command that all the information records in a time-phased force and deployment data not only are error-free for automation purposes, but also accurately reflect the current status, attributes, and availability of units and requirements.

validation — 1. A process associated with the collection and production of intelligence that confirms that an intelligence collection or production requirement is sufficiently important to justify the dedication of intelligence resources, does not duplicate an existing requirement, and has not been previously satisfied. 2. A part of target development that ensures all candidate targets meet the objectives and criteria outlined in the commander’s guidance and ensures compliance with the law of war and rules of engagement. 3. In the context of time-phased force and deployment data validation, it is an execution procedure whereby all the information records in the time- phased force and deployment data are confirmed error-free and accurately reflect the current status, attributes, and availability of units and requirements. 4. A global force management procedure for assessing combatant command requirements to determine viability, for sourcing, with respect to risk and prioritization between competing needs and the nature of the requirement. See also time-phased force and deployment data; verification.

vehicle summary and priority table — A table detailing all vehicles by priority of debarkation from a combat-loaded ship. Also called VS&PT.

verification — 1. In arms control, any action, including inspection, detection, and identification, taken to ascertain compliance with agreed measures. 2. In computer modeling and simulation, the process of determining that a model or simulation implementation accurately represents the developer’s conceptual description and specifications. See also configuration management; validation.

vertical replenishment — The use of a helicopter for the transfer of materiel to or from a ship. Also called VERTREP.

vertical stowage — A method of stowage in depth within a single compartment by which loaded items are continually accessible for unloading and the unloading can be completed without corresponding changes or prior unloading of other cargo.

vetting — A part of target development that assesses the accuracy of the supporting intelligence to targeting.

voluntary tanker agreement — An agreement established by the Maritime Administration to provide for United States commercial tanker owners and operators to voluntarily make their vessels available to satisfy the Department of Defense to meet contingency or war requirements for point-to-point petroleum, oils, and lubricants movements. Also called VTA.

vulnerability — 1. The susceptibility of a nation or military force to any action by any means through which its war potential or combat effectiveness may be reduced or its will to fight diminished. 2. The characteristics of a system that can cause it to be degraded (incapability to perform the designated function or mission) as a result of being subjected to a certain level of effects in an unnatural (man-made) hostile environment. 3. In information operations, a weakness in information system security design, procedures, implementation, or internal controls that could be exploited to gain unauthorized access to information or an information system. See also information operations.

vulnerability assessment — A Department of Defense, command, or unit-level evaluation (assessment) to determine the vulnerability of an installation, unit, exercise, port, ship, residence, facility, or other site to a terrorist attack. Also called VA.